It is also a lambskin or sheepskin. To obtain a wool fiber through uniform depth for the unique look and feel of the material. In other terms, shearling is a shorn wool going through the process of the pelt of a yearling sheep which shows once in a moment. Mostly the shearling outfits and other stuff created through the tanning of pelts to form wool of uniform depth still intact on them. The categories of shearling include the leather with typical pelt and leather with suede layer on one side and other layered with shorn fibers used to take out the moisture or regain the moisture depending on the condition of humidity. That’s why items created through this are more comfortable to wear.

These outfits have mostly been worn in America & Europe side since ancient times. These two continents remain popular in creating modern fashion and style wear. These Women Brown Faux Shearling Leather Jacket mostly used in the winter season stitched through the process of synthetic shearling attached with fabrics on one side to give the appearance of a trendy shearling. Boots created through shearling are very popular in style in young women of the fashion world. The usage of sheepskin in the streets is essential to survive in cold weather. The category includes the B3 bomber jackets created during the 1st World War in low freezing temperature to protect the pilots in planes. The usage of military stuff in the 2nd World War continues. It converted it into modern cold-weather outerwear in street fashion.

These are the basic outerwear and a sharp method to keep warm during winter. With various kinds of stuff for you to look over, you'll have the option to locate the one that suits the individual styles and events best. Whether you're dressing for streetwear or formal gatherings.

In ancient times, the sheepskin and the creation of a jacket named B3 Bomber created a reputation in the history of aviation. It is not easy to survive in cold freezing temperatures that’s why this material can help them to stay warm and alive in that situation and also difficult for crewmen to perform their duties there. 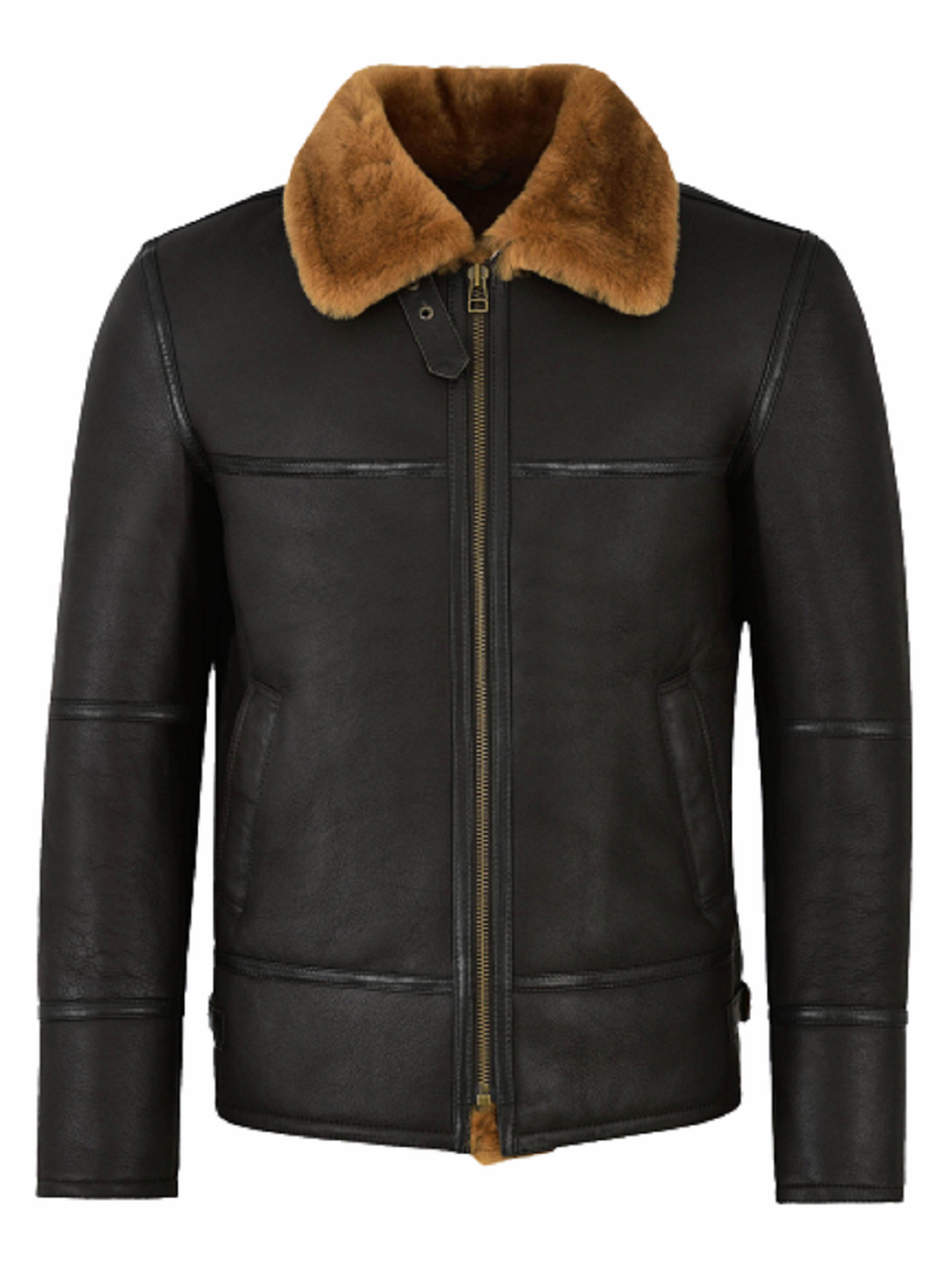 It is crafted through the wool of sheep to excess the moisture, contain heat and insulating air spaces. The creation of this B3 Bomber Shearling Jacket helps bomber crews to provide protection & comfort against the rugged and tough exterior to provide softness in the insulating interior. In today’s scenario, they provide soft and incredible comfort through high synthetic fibers that sheepskin jackets naturally available. The B3 indicates the determination and bravery of ethos in the entire continent of the United States. The condition includes the drizzling, strong winds, wet snow and other different blizzard conditions. The B3 insulates the high impact activities to prevent heat loss during the cold days.

In 1927, the 1st A1 jacket was produced in 1931. The iconic flight jacket was a first vital step in creation through many contractors but most of the things are common and very wide details on these jackets. It is not only associated with cold air but it has cuffs and a knit waistband which gets larger on the waist for a perfect fit. The waist side had flapped pockets in it. Whether used by the Navy or Air Corps, the stitching and size of this material depend on the creator.It features the cuffs & waistband through knitted wool to set the standard in design for fighter stuff to move forward. The quality of leather used in these jackets seems to be horsehide, sheepskin, and goatskin used in different events and it is the most unique jacket of ancient times and their value can’t be determined. 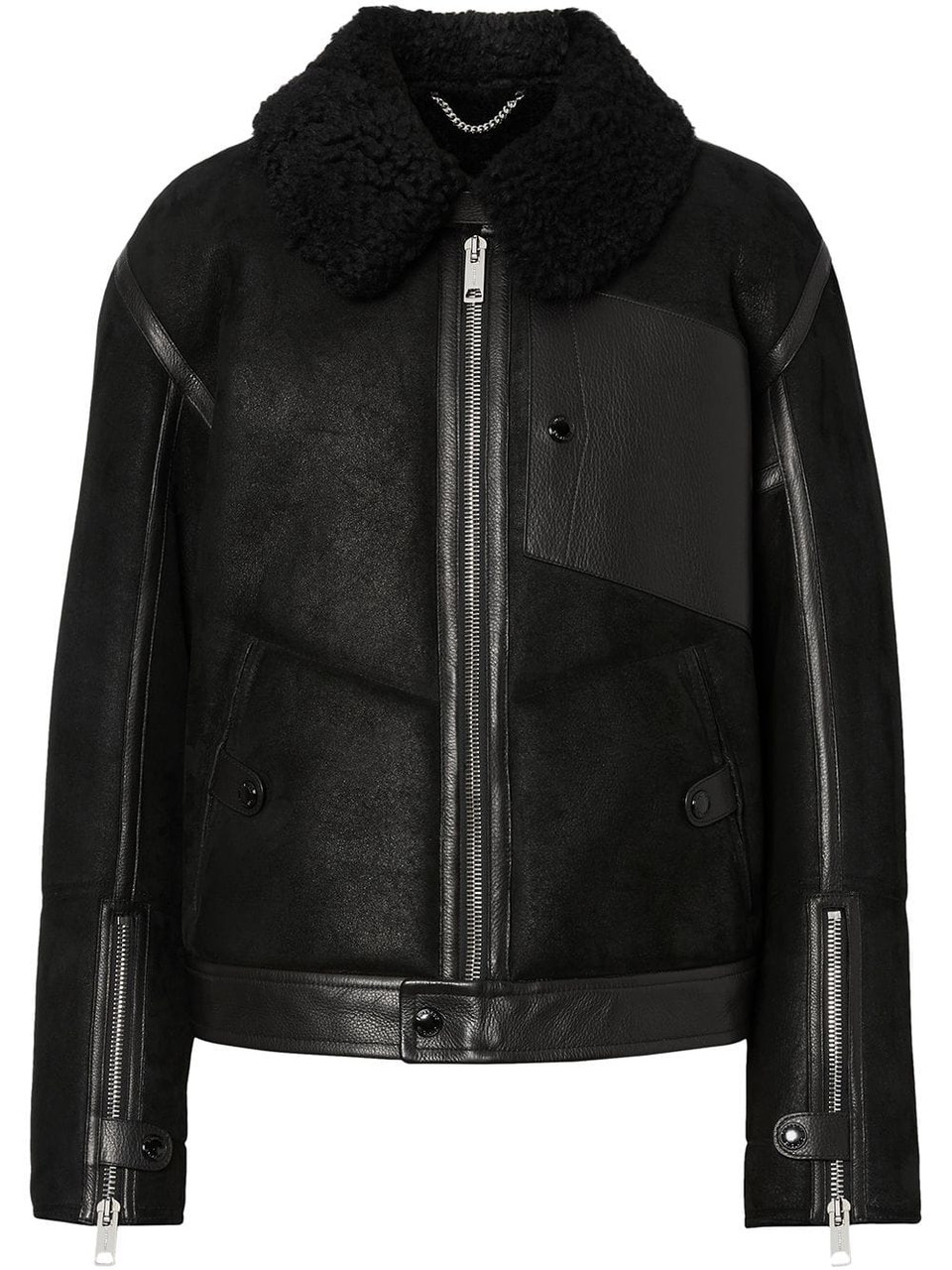 Jimmy Doolittle, the flying superstar won this jacket. It features a horn type button for fastening, heavy lining of cotton with two pockets of flapped cargo by the exterior of capeskin (similar to sheepskin). The military officials try to close the production of capeskin as the purpose behind the creation of stuff will not fulfill the requirements to survive the utilitarian. Charles Lindbergh wore this A1 style jacket in transatlantic 1st solo flight in 1927.

The G2 Leather flight jacket never completely shown as a 'military issue' it moves the non-military personnel advertises! Grow in the later phases of WWII, this cool looking and smooth surface. A flight jacket that the two militaries would use as an issue out to their pilots. Sadly, the American War Department was a little bit slow to choose about the Sheepskin Winter Jacket and the war eventually finished before making any major decision. 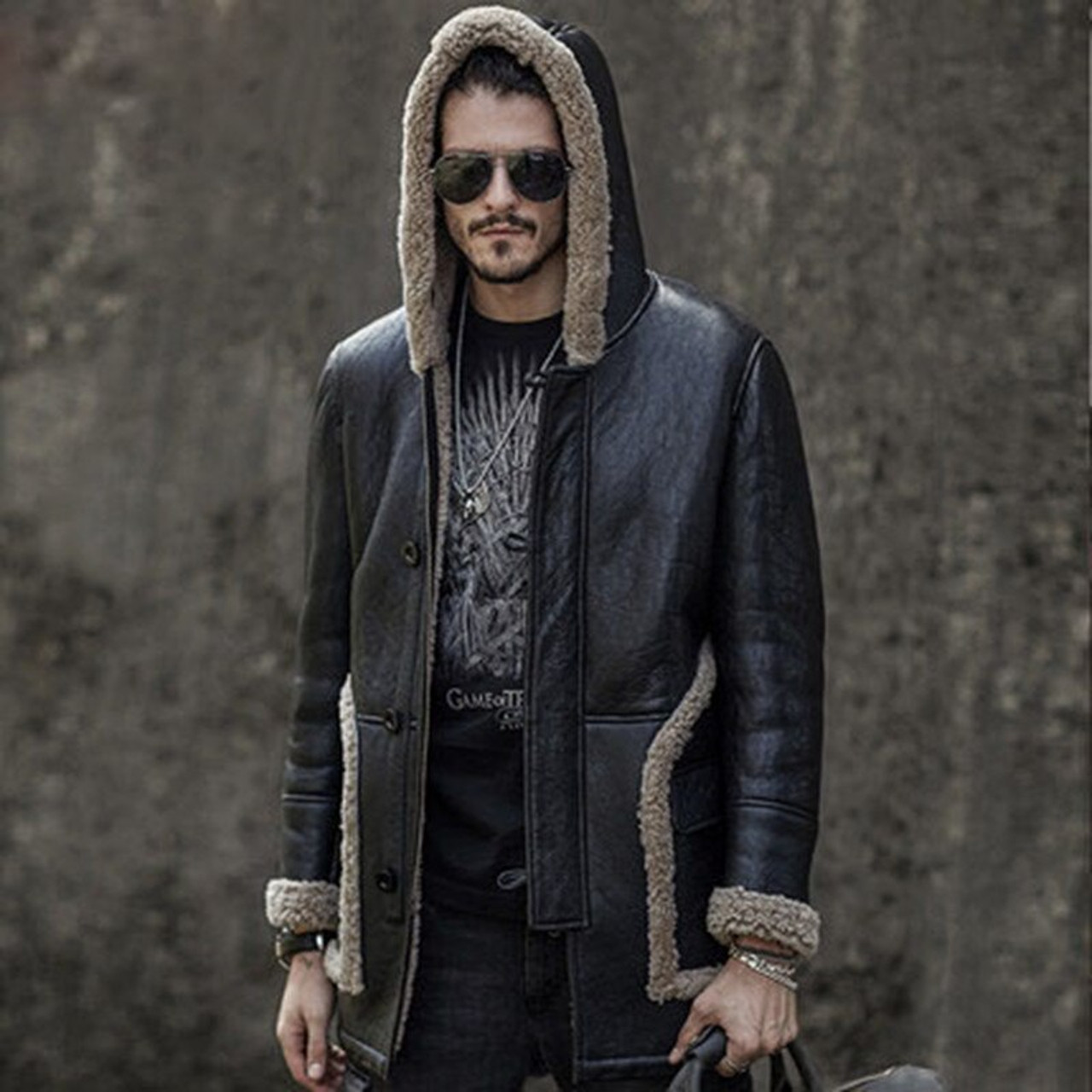 A couple of aircraft G2 flight stuff was issued out, although the war finished before it turned into a staple thing. When you think of something great regarding survival, the G2 Raider Jacket has done quite that recently. At the point when the Outerwear Apparel Market got wind of the G2 Raider stuff and its smooth modern apparel, it was developed by USAAF in 1943 in replacement of A2. Aviation jacket was created under the supervision of the Navy & Army as a joint venture which officially adopted the service. In the 1980s, the late return of duty by A2 abandoned their jackets in favor of nylon & cloth by AFF. They created the two inside and outside wind flap pockets different from ANJ2 against ANJ3.

It is based on the model of M422A that arrived just before the creation of the G1 jacket in 1940. It is very similar in look from the A1 model of this Top Gun Bomber Leather Jacket with the addition of a collar made with sheepskin in a notable flight. 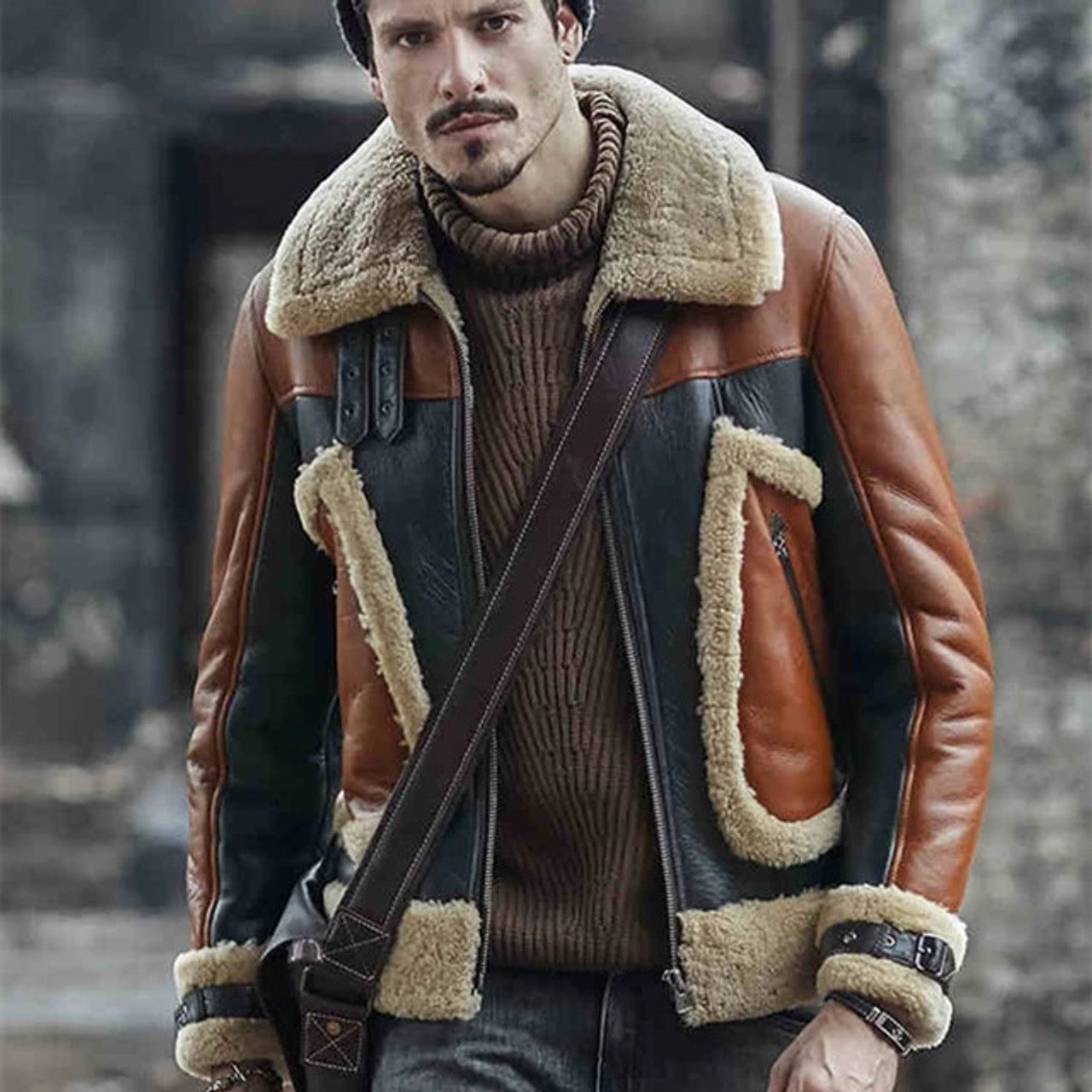 In the decades of the following jacket, other bomber classic style jackets have been duplicated many times. It was also utilized in military stuff in the 1950s until the Korean War occurred at that time. As the A2 gets older, G1 arrives at the event. It was also owned by Navy and Army Military forces in the ancient times of the 30s century. In 1943, Air corps pilots didn’t replace it with A2. It is also known as ANJ3 but after the end of the war, it received the designation as G1.

The RAF Shearling Bomber Jacket was worn by those bold Pilots who rose into the English skies to meet the adversary in what was called; the Battle of Britain. The British Royal Air Force speaks to the embodiment of English bravery during WWII. Worn over London skies by English military pilots flying Spitfire and Hurricane warriors in air fights against Nazi powers. 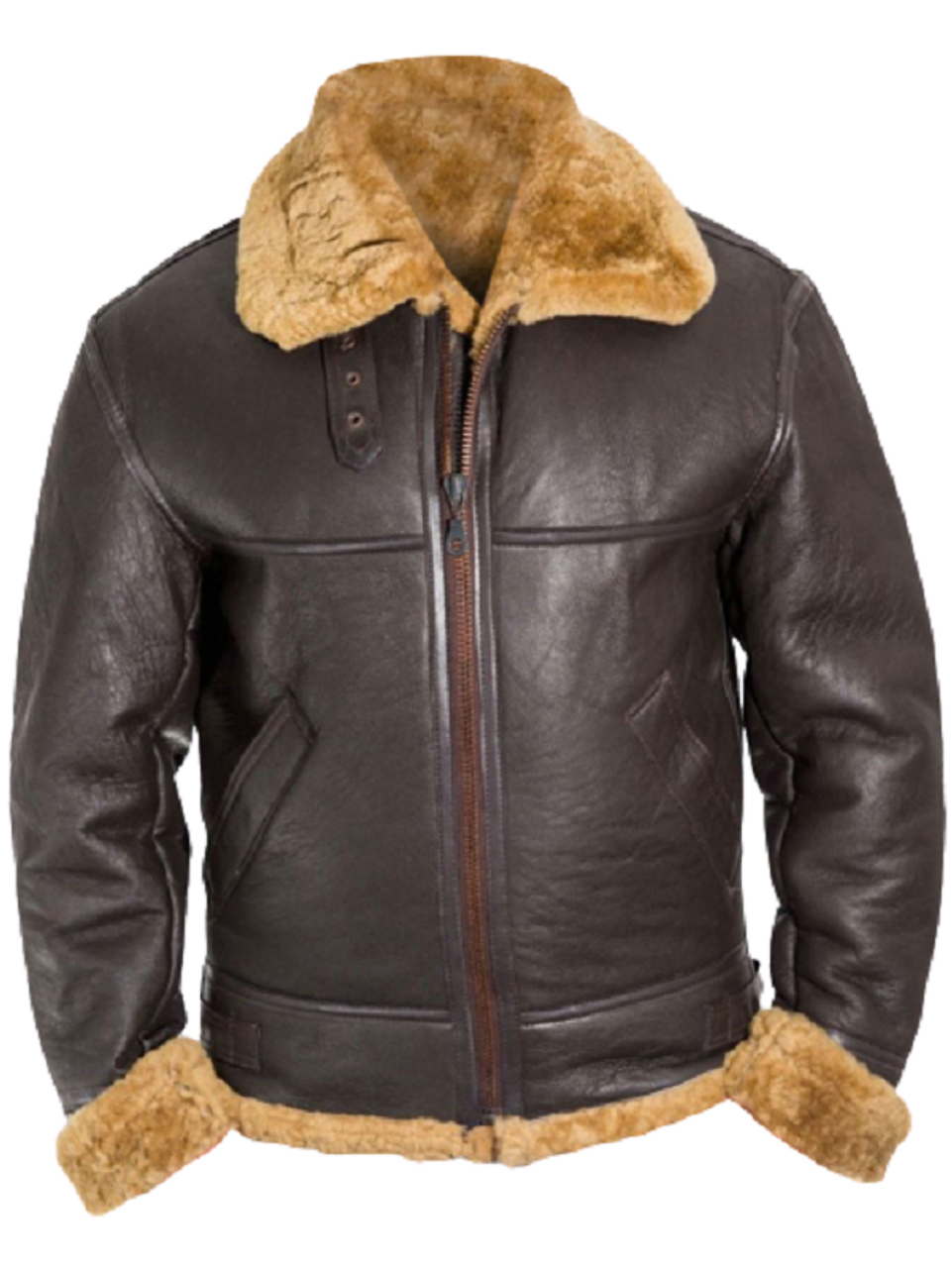 British men and RAF Fighter Pilots from numerous countries wore this prominent warm material while battling in the skies over London and in British Bombers over Europe. Irvin created these jackets at Letch worth. During the battle of Britain and WWII, they supplied the RAF to the armed people. To meet the demands of subcontractors, these jackets were so popular through Irvin to admit the services. During the war, they are responsible for creating jackets in different patterns and variations. Irvin thought of closing the production of jackets due to less demand after the war. But the fans still maintained their stuff, sometimes available on the second-hand market. These jackets are not easily available in the markets. Although, Simon Green has a Real Flying jacket in 1977. The men's RAF Bomber Jacket is Hand cut from supple Sheepskin Pelts and exclusively available at Celebs Leather Jackets.